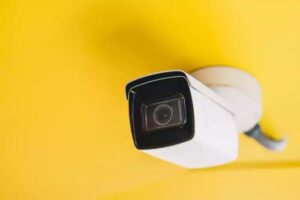 Why Do We Need CCTV Surveillance System

Why Do We Need CCTV Surveillance System?

If you are thinking that why we need CCTV surveillance system in our societies and in particular properties whether it is residential, commercial, or public places.

What Is CCTV Surveillance System?

Closed-circuit television (CCTV), also known as video surveillance, is the use of video cameras to transmit a signal to a specific place, on a limited set of monitors. It differs from broadcast television in that the signal is not openly transmitted, though it may employ point-to-point (P2P), point-to-multipoint (P2MP), or mesh wired or wireless links. Even though almost all video cameras fit this definition, the term is most often applied to those used for surveillance in areas that require additional security or ongoing monitoring. (Videotelephony is seldom called “CCTV”.

Surveillance of the public using CCTV is common in many areas around the world. In recent years, the use of body-worn video cameras has been introduced as a new form of surveillance, often used in law enforcement, with cameras located on a police officer’s chest or head. Video surveillance has generated significant debate about balancing its use with individuals’ right to privacy even when in public.

One of the most cost-effective ways to provide security in the workplace is with CCTV Security or Video Surveillance Systems. The highly advanced technology of modern security cameras allows businesses to lower costs and risks by protecting their assets with continuous and seamless monitoring of their facilities. These relatively inexpensive cameras have for the most part replaced expensive security guards while increasing the reliability and accountability to near 100% by providing real-time remote video surveillance.

It Reduces The Cost And Risk.
CCTV security systems prove themselves as the best investment as soon as they are installed. Full view of your premises and real-time recording as well as remote online access by the owner/manager lowers the risk and prevents costly incidents such as burglary, fire, vandalism, etc.

Prevention From The Criminal Activities.
Criminals target buildings and facilities when they see there is no monitoring or watchdog. The very presence of CCTV cameras on an installation is enough to deter potential criminals and prevent their actions at the outset. Similarly, by the sight of a safety hazard, employees can take the necessary action to reduce the risk and alleviate the source in the shortest possible time.

It Coverage 24/7 Hours.
A well-designed CCTV infrastructure is practically impenetrable and can provide 100% coverage. Multiple cameras keep an eye on each other’s blind spots in addition to keeping an eye on the most vulnerable areas of the property, full monitoring is not hampered by human errors such as the guard being on shut eye or being busy with something else. Remote online access as well as the recording of the events documents everything should it be needed by the police or judge.

It Keeps The Honesty In Working.
CCTV cameras on the outside prevent break-ins by outsiders, but if installed inside the facility to monitor sensitive materiel, goods, and assets, as well as vulnerable areas of a facility, it will prevent wrongdoing by company employees. Even if something happens, the recorded video will prevent wrong accusations and a lack of trust among all staff.

Encouragement In Behavior.
CCTV cameras help in creating discipline among employees and customers alike. CCTV cameras encourage employees and buyers to be on their best behavior alike. It also gives customers a sense of security and safety as they know they are protected and gives them confidence in doing business with you.

Safety Incidents Prevention.
CCTV cameras can be installed in high-risk areas of a business facility or establishment. These high-risk and accident-prone areas include locations where fires can break out as well as locations where a potential danger to the building and personnel exists. Properly selected cameras can prevent potential damage because emergency measures can be taken immediately with careful monitoring.

It Provides A Better Law Enforcement Assistance.
CCTV recording of the scene of the crime, allows law enforcement agencies to use the footage and release photos and videos of the culprits to the public. A picture or a video record of the suspect can make a huge difference when it comes to making an arrest and getting dangerous criminals off the street.

In industrial plants, CCTV equipment may be used to observe parts of a process from a central control room, for example when the environment is not suitable for humans. CCTV systems may operate continuously or only as required to monitor a particular event. A more advanced form of CCTV, using digital video recorders (DVRs), provides recording for possibly many years, with a variety of quality and performance options and extra features (such as motion detection and email alerts). More recently, decentralized IP cameras, perhaps equipped with megapixel sensors, support recording directly to network-attached storage devices, or internal flash for completely stand-alone operation.

By one estimate, there will be approximately 1 billion surveillance cameras in use worldwide by 2021. About 65% of these cameras are installed in Asia. The growth of CCTV has been slowing in recent years. The deployment of this technology has facilitated significant growth in state surveillance, a substantial rise in the methods of advanced social monitoring and control, and a host of crime prevention measures throughout the world.

Advantages And Disadvantages Of the CCTV Surveillance System.

It Increases The Public Safety. It increases safety when a CCTV surveillance system is placed. This is because everything happening in public gets recorded. It becomes easier to analyze crimes that occur too fast to be prevented in time. Just like when we install a home security camera, we gain increased house safety. With such information, the authority becomes more aware of safety hot spots in any neighborhood. They can improve their response times and increase the number of patrol officers in these places. For example, PTZ security cameras put in public spaces, like a crossroad, retail stores, parking lots, museums, concert halls, do an excellent job of providing 360° seamless surveillance solutions. Public safety is also improved as people feel more confident no matter the areas that they pass or where they visit.

It Can Reduce The Crime Ratio. The crime rate is significantly reduced whenever there are public surveillance cameras. Thieves and robbers will be afraid of leaving too much evidence whenever they participate in fraud on the streets. They will be caught on the cameras, and tracking them down will be easier for law enforcement. It is also better to have a record of events that happen in public places since it will be easier to investigate the reported crimes and develop measures for regulating the rate at which these crimes occur. Public surveillance cameras are also an effective deterrent against crimes in these areas, and as such, the crime rate will be significantly reduced, and people will feel more comfortable.

It Provides The Legal Proof Or Clues About The Criminal Activity. Evidence is usually the most critical part of convictions and presenting the best case in court requires enough evidence to prove to everyone that the criminal was responsible for the act recorded by the camera. Whenever cameras are in public locations, it becomes easier to piece together evidence and facts, making it easier for the criminals to catch and convict in court. In some cases, if there were no CCTV security camera systems in public places, there would be little or no evidence to convict the person of the crime and the individual may go free. With night vision security cameras on watch, robbers can be recognized even if they commit a crime in dark areas. Additionally, using video cameras in public places means that it will be harder to hide from the law, and the courts will have an easier time convicting the criminals since there will be more than enough evidence.

Helps In Catching The Criminals. Whenever a crime has happened, the criminals are always known to leave traces of their presence and activity at the crime scene. However, public video surveillance makes things much more efficient as thieves or criminals can be tracked down more quickly. Footage of their activity will have been recorded, and investigators and law enforcement will reach them more effectively.

It Is More Convenient To Make Our Life Easy And Risk-Free. Public places are exposed to the eye of the law, and as such, nothing that happens will pass the attention of the law. As such, it becomes easier to live regardless of the neighborhood, and as such, people will be more comfortable living in places that did not have the reputation of being safe in the past. When more neighborhoods are conducive to living in, people will be able to live anywhere they choose, and as such, they will also be able to be more productive, which is good for the economy.

The disadvantage of CCTV surveillance system as well as in positive view. One downside of CCTV surveillance systems is that they can not actually stop a crime from being committed. However, it can detect criminals from committing crimes. It can also record the crime which can be used as evidence to catch the criminal and for your insurance company.

Installing CCTV surveillance cameras can be expensive. It is said that, if you speak to the right security system experts or service providers they can ensure you get the best security solutions or systems for your requirements and within your budget. Finally, if installed incorrectly, your CCTV footage can infringe privacy rights. Again, using a professional CCTV surveillance system installation companies or experts can make sure that no privacy rights are infringed.